My Story as a Jena 6

My Story as a Jena 6

This event is FREE to attend, but books will be sold for $10.

Bryant will deliver a firsthand account of navigating the youth justice system. He will talk about his harrowing experiences in youth justice and how that has impacted his life since. This will be an invaluable educational experience for teens and adults.

Bryant Purvis says he wrote My Story as a Jena 6 “to get the truth out about what happened” on December 4, 2006, in Jena, Louisiana.

“When I was seventeen years old, I was charged with attempted murder. It was a crime I did not commit; in fact, I wasn’t even in the room when it happened. But I was soon implicated as a conspirator, and from that moment on, my life changed forever.”

Bryant Purvis was born in 1989 in Central Louisiana. He comes from a large family. He attended Jena High School in his hometown and later graduated from Hebron High School in Dallas, Texas. From 2011 – 2012, he played basketball at Grambling State University. In 2015, Bryant wrote a book about his high school experience in Jena, Louisiana. In the fall of 2006, a chain of events unfolded that led to a serious fight on school grounds. Bryant and five other students became known as the Jena 6. They were charged with attempted murder and their lives changed dramatically. People across the country organized to ask important questions. Why wasn’t this fight treated as an assault rather than attempted murder? Why wasn’t the initial incident that sparked the fight punished more clearly as a hate crime? Bryant has personally wrestled with these questions in his book. He continues to reach out to others through an organization called Achieve Higher Goals. He is continuing to write, speak, and develop his own business in the fashion and fitness industry.

Would you like to donate? More info at https://www.gofundme.com/bryantpurvis 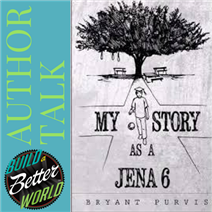