Forever Young Adult Book Club: A Thousand Pieces of You

January’s selection, A THOUSAND PIECES OF YOU by Claudia Grey, has been called ORPHAN BLACK meets THE CLOUD ATLAS. Join us for Russian style hot tea and book talk on January 23rd! Marguerite Caine’s physicist parents are known for their groundbreaking achievements. Their most astonishing invention, called the Firebird, allows users to jump into multiple universes—and promises to revolutionize science forever. But then Marguerite’s father is murdered, and the killer—her parent’s handsome, enigmaticassistant Paul— escapes into another dimension before the law can touch him. Marguerite refuses to let the man who destroyed her family go free. So she races after Paul through different universes, always leaping into another version of herself. To accomplish her goal, she must learn how each world works, and confront the many people she has the capacity to become. But she also meets alternate versions of the people she knows – including Paul… 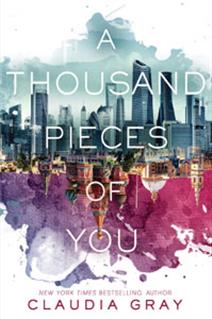