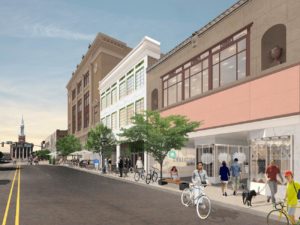 In the sometimes hoitey-toitey world of historic preservation, “Adaptive Reuse” is tossed about like so many festival frisbees. It pretty much means what it says…an old building is adapted to another use to make it functional again. As cool and unique as historic buildings are, they are of little use sitting vacant and underutilized. Too many communities are dealing with too many buildings that are creating no opportunities, no jobs and no tax base. What they do create are hangouts for transients and criminals and they end up costing the local municipality money to police, board up and take far-away owners to court. For 12 years, the Ogilvie Hardware building  was one of those unfortunate structures in downtown Shreveport. 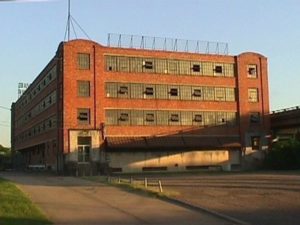 The wholesaler’s days became numbered when the Mom-and-Pop stores that were its stock in trade began disappearing. The Wal-Marts, Lowe’s and Home Depots had no need for Ogilvie’s hardware goods, and the Mom-and Pop businesses that did were soon overwhelmed by the big box stores’ acres of items and lower prices. In November 1999, Bert Ogilvie locked the door to the 91,000 square foot hardware company one last time. After two consecutive money-losing years, the 72-year history of the Ogilvie Hardware Company came to a sad and quiet end.

Those 72 years were something else indeed. When the then-Thomas-Ogilvie Hardware Company building opened at its current location in 1927, it was a cutting edge warehouse boasting of telephones in every department, elevators and an almost unheard-of sprinkler system. It cost the princely sum of $210,000 in an era when a pound of ham cost 3 cents, a loaf of bread 9 cents, a lawnmower, $8.75. If you found a couple of dimes on the ground, you could buy dinner for the whole family. Calvin Coolidge was President, and in South Carolina, some golfers were arrested for violating the Sabbath. Shreveport was on the grow and downtown was booming. The hardware warehouse, which sat on the site of the company’s old mule barn, was surrounded by other businesses and a number of homes. The Blalock-Knighton Wholesale Produce sat just to the east and trains ran up and down the tracks just behind the building. Ogilvie in 1950. The produce distributor is the long white building.

Elsewhere downtown, the 1920s was proving to be the Golden Age of downtown building and major projects such as the  Lane and Slattery Buildings, the Sears building, the YMCA, the Municipal Auditorium, the Arlington Hotel and others were completed by tycoons made wealthy on the railroads and black gold. H.L. Hunt and Howard Hughes, Sr., were making their first fortunes in Shreveport, oil was flowing in north Caddo Parish, the railroads were rolling, people needed all the goods found at Thomas-Ogilvie— things like dynamite, hardware and plumbing supplies, bicycles, ammunition and sporting goods. In 1948 when patriarch Russell Ogilvie passed away, son Buck returned to Shreveport to take over a thriving family business that became even busier in the aftermath of WWII. Buck and wife Carolyn would tend to Ogilvie for the next 38 years. The job was far from idyllic. Buck’s most vivid memories involve his worrying every Sunday night about what Monday would bring. “With 55 employees, you always knew one wouldn’t show up or another would have a crisis,” says the 95-year-old. Buck never really intended to manage a hardware company. He graduated from college in 1938 with a degree in chemical engineering and went to Texas to seek his fortune in the oil business. When his father died, he was called back home to become Ogilvie Generation #2. Most of his memories of the old place are happy ones, until that fateful day in 1981 that he remembers so well. It was the day the company’s first computer arrived, a day he remembers like it was yesterday. “It was my biggest headache,” he says. “We had to come in every Sunday just to get caught up on the computer.” Buck’s computer is long gone, but soon, others will replace it in the hardware’s 90-open concept loft apartments. In March 2011, Provident Realty Advisors from Dallas, Tex., happened to see the Ogilvie Building posted on the Internet, decided to check it out and quickly realized it would be a good fit for residential. It had the land, it had the interior space, and it had the historic and architectural lineage to be ‘re-adapted’ into something completely and totally different- upscale living spaces. Provident Realty Advisors’ Matt Harris, the vice president of multi-family development, handheld the project to completion and along the way, found one of the orginal safes from the building in deep East Texas. Matt was thrilled that he was able to purchase the safe and return it ‘home.’ Provident was careful to respect the historic integrity of the building and took pains to strip dozens of wide-plank shelving units to use as wainscoting in apartments, moved delicate clay tiles to focal points on the first floor, and removed only offensive graffiti from giant concrete posts which themselves are worked into the decor of the interiors of the units. The work and the care that went into the work was almost overwhelming to Ogilvies Buck and Carolyn, Bert and Jamie, Russell and various daughters and sons, nieces and nephews taking a private tour before the grand opening. Members of the Ogilvie clan.

“Amazing.” “Breath-taking.” “Unbelievable,” was repeated over and over as the Ogilvie family moved through the common areas and from apartment to apartment. “We’re so impressed with the job they (Provident Realty) did,” said Bert. “I want to live here!” said Jamie. “I’m just so glad they kept the name,” repeated Buck. Buck will be happy to know that changing the name was never, ever an option. Ogilvie Hardware Company was a Shreveport landmark, and now, Ogilvie Hardware Lofts will carry on. Adaptive? Check. Reuse? Double Check. A beautiful building gets a second chance and downtown Shreveport wins because of it.

If you are interested in other historic buildings that can be adaptively reused, check out the Real Estate section here on our website.

Want to know more about Historic (Commercial) Tax Credits and information about rehab downtown? That information is right here.

A building constructed in the early part of the Twentieth Century that has sat vacant for more than a decade is back in business as downtown’s newest professional office/event space. In addition, the newly-completed rehabilitation at 601 Spring Street has been nominated for a Louisiana Heritage Award for preservation of an important historic and architecturally-significant building.

Once known as the ‘car museum’, the George T. Bishop Building (so named by Mr. Bishop himself in 1925) is now the home to Prevot Design Services APAC, a full-service architecture, planning and interior design firm and 601 Spring, an event center.

The 50,000+ square-foot building has been repurposed as a sleek and contemporary office space juxtaposed into a historic framework. The vision took shape with the help of company vice presidents Paula Prevot and Lori Arnold and the team of Ashley LaBauve, Caitlin Lamothe, Sarah Delphin and Ronnie Duvall.

The building, which was approved for Historic (Commercial) Tax Credits, shows how existing interior structures can be used in new and creative ways. A giant concrete ramp that once led to roof parking has been recreated as stair-step office spaces with a type of ‘theater seating’ that allows each suite holder to see out a giant window into downtown.

Original concrete floors have been cleaned and polished. In the expansive lobby area, huge windows and giant chandeliers fill the space with light and the carved maple and mahogany wood doors and trim remain.

In addition to the new office and event space, 11,500 square feet in the northeast corner of the building is available for build-out for retail, office or residential uses. The original lobby of the GTB Building, complete with high ceilings, giant chandeliers and heavy timbers of maple and  walnut. An example of the elegant plaster work in the lobby. Each column has a different auto-related representation. One of the doorways leading into the lobby. The historic/modern workspace of Prevot and Associates. Reclaimed heart pine was used on the floors and this wall as a way to dampen noise and warm up the look of the space. This shows the height of the ceilings. Exposed ceiling was left where appropriate, covered only for sound dampening. 11,500 sf of open space is available in the building to be converted to retail/office or residential. Interested? Contact Mark Prevot for details. The view from the roof. The roof was once used for parking so any type of structure–for parties or living—could be built here. Parking is in the basement of the building. It is gated and secure. 601 Spring, the name of the new event center space. Architect Mark Prevot (in front) with his talented crew.