Since its formation in 2006, Pocket Change has established itself as one of the most popular bands in the area. Comprised of four musicians, the band features a twin-guitar attack, and plays music that has been described as, “Southern fried, Texas-style, blues funk-rock”. As such a description indicates, the band’s musical influences are many and varied, ranging from classic rock to blues to folk to soul to R&B.

All four members of the band are veterans of the Shreveport music scene and were active in the local music community prior to forming Pocket Change. Jacobs and Cascio are full-time members of one of the area’s premier blues bands, A.J. and the Two Tone Blues Band; they also perform as the acoustic duo, Loose Change. Ellis and Mackey have backed many of the well-known local players such as Betty Lewis, AJ Cascio, Dan Sanchez, and Joe Nadeau. 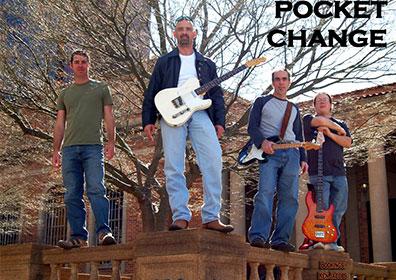