History in 5: High Five for Feibleman’s! At every first Thursday Artwalk, we host something we call ‘History in 5’. It’s a short talk about a historic building, person, event or place downtown. People seem to love learning more about the amazing history of our city center, which is very much like an onion in that you peel away one skin to find another. At our May Artwalk, History in 5 featured the building at 624 Texas Street that is now the vibrant Lofts at 624, a beautiful apartment building that also houses businesses and the popular Rhino Coffee Downtown. We have talked about the architecture of the building before. The May talk focused on some additional information we have discovered. Here’s a synopsis of History in 5: I remind people a lot that downtown is like an archaeological dig. Every building and every parking lot or vacant lot downtown used to be something else. Over the years, various buildings on every site have come and gone. One story wooden shanties gave way to two story wooden buildings that burned or were dismantled to become small masonry buildings, which became big, beautiful buildings demolished to make way for even bigger buildings. So much has gone before us.

The same is true for the NE corner of Louisiana Avenue and Texas Street. There was a gas station there, some dwellings, a doctor’s office. Across the street was the Cooper’s Mule Barn. In 1923, things changed for that corner in a big way.

In the early 1920s, a group representing a major department store called Feibleman’s came to Shreveport and spent more than a week looking at sites all over the city for their big, fine new store. After every site had been seen, they decided that the corner of Louisiana and Texas was where they wanted the store to be. Feibleman’s signed a 20-year lease, which provided themoney to build downtown’s most significant department store.  Architect Samuel G. Wiener was tasked to create the beautiful Beaux Arts- style building. People wanted to work at the new Feibleman’s Department Store -more than 1,000 people applied for the 350 jobs there- and when the store threw open its doors on the 5th of Oct. 1924- 40,000 people came through in just four hours! The Feibleman’s quickly became an area landmark and it was also the very first in the city to offer a store credit card.  This was a big deal and pretty complicated—think about it. Small businesses offered credit to some of their best customers, but this giant store was taking a lot of people at their word that they were going to eventually pay for the goods they purchased. A retired local banker named Don Updegraff shared with us that a man he had worked with was the one who initially worked with Feiblemans on this new-fangled concept. Don said several people from First National Bank would come to Feibleman’s and run the adding machine tapes to verify the totals to support the bank’s loans. In other words, Feibleman’s was pledging the accounts receivable as collateral for the loans. The store stayed a Feibleman’s until 1930 when it sold to Sears, becoming the Feibleman/Sears and later the Sears/ Roebuck Department store. In 1946, the store was completely remodeled and air conditioning was added. (It’s hard to believe life before A/C in Shreveport. How terribly uncomfortable that must have been.) In 1951, the store was the site of another huge improvement- the building became the first store in north Louisiana to have escalators installed! This was an amazingly big deal. Ads in the newspaper invited people to come to the store to ride the escalator, ‘Don’t Wait- Escalate!’ The ads promoted that the escalators were ‘four times safer than stairs’ and that ‘ONE of the escalators at the Sears store could move the entire population of the city in just 24 hours.’ By the 1950s, the Sears farm store and their automotive shop had moved in next door. By 1953, 450 people were employed at the downtown Sears. Local schools used to hold classes in the front window displays. Shoppers would be able to walk by and see what the children were learning.

In 1961, the era of Sears downtown ended when Sears  moved to Southern Avenue and Bossier City and the beautiful beautiful building at 624 Texas Street was vacated. Over the years, it would open briefly as a variety of businesses including a Lo-Mart grocery store. but mostly, the bricked-up building, once a beautiful ‘temple of commerce’, sat vacant. 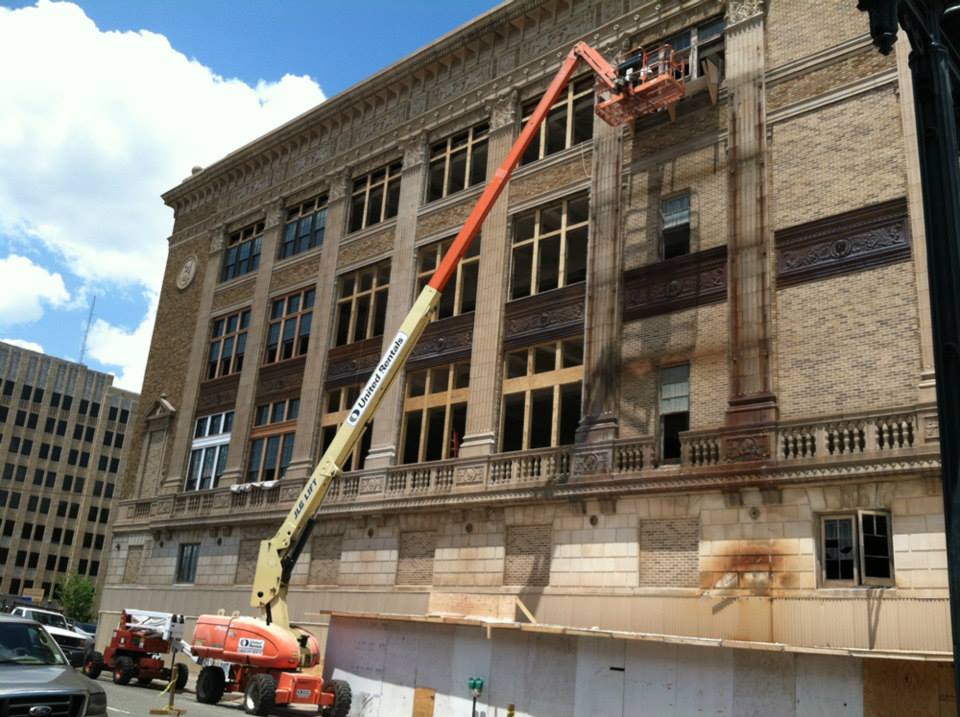 In 2012, the building was acquired by New Orleans developer Roland Von Kurnatowki, who pledged to rehab and adapt the building into something wonderful again. The current owner is Joan Von Kurnatowski Hooper, sister of Roland and, ironically, wife of Julian Feibleman, a member of the original Feibleman Department Store family. Hooper told us that half the family pronounces their name ‘Fee’ bleman and half, ‘Fi- bleman. One group spells it ‘Le’ and the other ‘El’ leading to much confusion in the historical data. There’s a term – Adaptive Reuse-and this building is a great example of it. It refers to historic buildings once used for one reason that are adapted to live another life under a different use. We see that in many places downtown. Old furniture stores are now art galleries and restaurants, old banks are wonderful apartments, old office buildings have become condos. We’re lucky to have buildings like the old Feibelman’s/Sears as something like that would likely NOT be cost effective today. With Amazon and online buying, giant retail spaces aren’t being built anymore. The lofts at 624 as it appears today.

We’re thrilled that our one-time department store has been able to make the transition into a place that we live, work, shop and love. Here’s to many more!